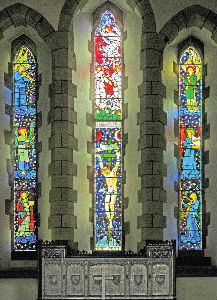 The church building’s greatest asset is undoubtedly its East window.  Designed by Sir Edward Burne-Jones and made by William Morris & Co in 1881, some 16 years after the church was built, the window shows the Crucifixion and the Ascension, surrounded by spectacular images of six angels, each playing a different medieval musical instrument.

It is regarded as one of the most magnificent Morris windows imaginable and described by Sewter as a ‘window of exceptional beauty’. (A. Charles Sewter, The Stained Glass of William Morris and his Circle; 1974).

Despite this, it was relatively unknown until one of the figures was chosen by the Royal Mail as a Christmas stamp in 2009.  Dressed in a flowing blue cloak and playing a mandolin the chosen figure and the full window now frequently attract the interest and admiration of visitors from across the country and beyond. Set against a dark blue background, spangled with stars of white, gold, silver and red, and topped by an emerging sun and crescent moon, the figures never fail to delight and provide a beautiful setting for worship. 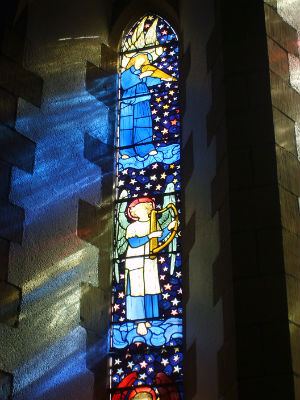 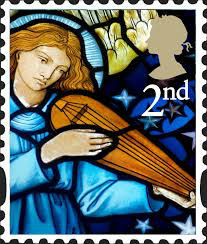 We have another Burne-Jones window on the south side of the church. It shows St. Margaret, as the previous church in Staveley was dedicated to her, and St. James'. 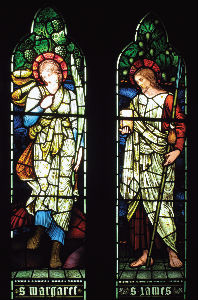 Do come and visit.  We hope that you too will be inspired by such breathtaking beauty.

Our window was featured in the February edition of The Magazine Antiques, America’s premier publication on the fine and decorative arts, architecture, preservation, and interior design. You can read the article, which is a book review, here.